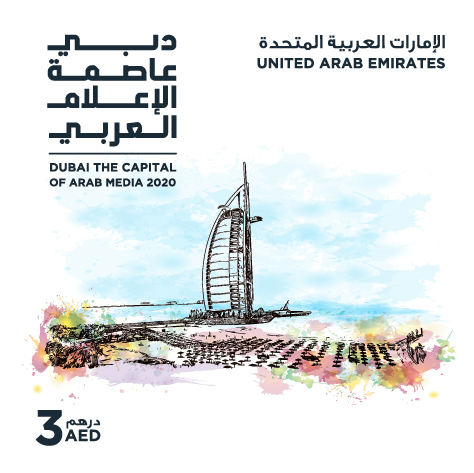 Commemorative stamps featuring the ‘Dubai, Capital of Arab Media 2020’ logo have been issued by the Dubai Press Club (DPC), in collaboration with Emirates Post.

The stamps highlight the emirate’s leading role in shaping the development of the UAE and Arab media sector over the last two decades. Dubai was selected as the ‘Capital of Arab Media for 2020’ by the Council of Arab Information Ministers at its 50th session held in Cairo in July 2019 in recognition of its leadership role in Arab media growth. The logo on the stamps – designed by Emirati artist Reem Al Shamsi, a senior design student at the American University in Dubai – was unveiled earlier by the DPC in January, during its 20th-anniversary celebrations.

The stamps highlight Dubai’s leadership in driving regional media industry growth in line with the vision of His Highness Sheikh Mohammed bin Rashid Al Maktoum, Vice-President and Prime Minister of the UAE and Ruler of Dubai. They also highlight the emirate’s status as a vibrant regional and global media hub that is home to more than 4,000 companies from across industry sectors.

“Through our commemorative stamp issuance’s, we seek to celebrate key achievements that reflect the path-breaking excellence attained by people and industries in the UAE. Being named ‘Capital of Arab Media’ is testament to Dubai’s role in galvanizing the rapid growth and evolution of the region’s media industry. As part of our support for the country’s development, we seek to mark significant milestones in the growth and progress of media and cultural sectors through such initiatives,” said Abdulla Mohammed Al Ashram, Group CEO of Emirates Post Group Company.