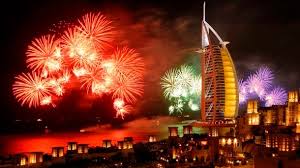 New Year’s Eve is one event brings forth unity in diversity, with people looking forward to all year – there’s always something significant and emotional about the New Year. During the hours leading up to the countdown, the city’s best hotels and eateries pull out all the stops to ensure that it’s a moment to remember forever. From huge brunches to sit-down dinners, the dining options in Dubai are endless.New Year’s Eve in Dubai is massive, with loads of parties, fireworks, brunches and dancing the night away until the early hours. Some of the best spectacular fireworks can be seen from Burj Khalifa, Atlantis the Palm, Dubai Frame (for the first time). If you want to celebrate a quiet New Year, perhaps book a desert safari tour for some serenity in the dunes.Burj Khalifa is a great place to be, especially with the extravagant pyrotechnic shows at Burj Khalifa and a water-music dance at The Dubai Fountain. Thousands gather along with the fountain and then head to The Dubai Mall for some dinner. In the shadow of the massive tower lies Burj Plaza, an open-air promenade. You’ll find a multitude of dining options with a direct view of the pyrotechnics. Just across the bridge from The Dubai Mall, you’ll find Souk Al Bahar where you can dine at upscale restaurants such as Karma Kafé and Serafina that boast views of the Burj Khalifa and The Dubai Fountain.